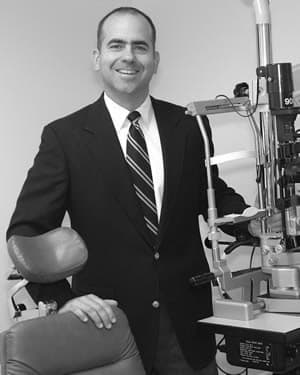 Prior to coming to Connecticut, Dr. Manganiello practiced internal medicine focusing on, among other areas, infectious diseases. He served as an attending at both NYU Medical Center and Bellevue Hospital. He took care of HIV/AIDS patients at the height of the crisis at New York Y University Medical Center and the New York State prison population at Bellevue Hospital. His work in New York City prepared him to diagnose and treat a vast array of medical issues for diverse patient populations. He has always maintained his sense of medical excellence and compassion for all of his patients.

As an eye physician and surgeon, he sees children and adults to diagnose and treat conditions of the eye including annual exams and general eye wellness, dry eye, glaucoma, advanced macular degeneration, diabetic retinopathy to name a few. His practice offers eye products including contact lenses, eyeglasses and select OTC nutrient supplements for specific eye conditions.

Dr. Manganiello is involved in several causes that adversely affect communities and is a supporter of populations close to his family’s heart including: our older citizens and children of incarcerated parents. Dr. Manganiello’s wife is a marketing communications professional and together they have two daughters, one at New York University and the other in middle school.

*Please do not include personal identifying information such as your birth date, or personal medical information in any emails you send to us.